There and back again

Four years ago I woke up with vertigo, I was 38 years old.  I previously had small episodes of dizziness, but nothing like what I was experiencing.  Everything was spinning, whether I was sitting up or lying down, eyes open or eyes closed.  I quickly began vomiting from the motion.  My daughter drove me to my doctor’s office, where they told me I had BPPV, gave me a shot of anti-nausea, and sent me to an ENT.  He confirmed the diagnosis and sent me home with a prescription for anti-nausea and told me to sleep sitting up until the vertigo subsided.  It took two weeks to finally completely go away.

For the next year, I had vertigo off and on.  There seemed to be no rhyme or reason to the episodes.  I would take the anti-nausea and sleep sitting up for a few days.  I saw the ENT several times, each time explaining my symptoms and what I believed led up to them.  Every time me told me it was BPPV and I needed to learn to live with it.

During this time, I was also having what I thought were hormone related issues.  I saw my OBGYN, and we decided that a tubal ligation was the best option as I was not responding well to birth control pills.  She told me my periods would get worse with the tubal ligation, but the other problems I was having, nausea, hives, moodiness, should subside.  Within two months of having the tubal ligation, I started having horrible attacks of nausea and vomiting, increasing around the time of my period.  I would wake up in the middle of the night vomiting without any apparent reason.  I started seeing an endocrinologist to see if this was related to a hormone imbalance, but of course, everything came back “normal”.

The morning I was on leave for a 2-week vacation to British Columbia & Alaska I woke up with vertigo and vomiting again.  I managed to settle it down enough to get on the plane, but my vacation was predominantly spent in bed.  I decided I needed to see a new ENT.

Just before I saw the new ENT traveled to see my parent’s in Arizona.  The following day I started vomiting in the afternoon, after 6 hours I asked my mom to take me to the emergency room.  They gave me three anti-nausea and an IV to rehydrate me.  It took another 2 hours to stop vomiting.  They couldn’t tell me what was wrong, just to stay in bed and drink Gatorade.

My anxiety during this was off the charts, it’s the first time I ever asked to be put on anti-anxiety medications.  Everything was so unpredictable, the vertigo, nausea and vomiting.  I stopped going out with friends, confining myself to my office and my house.

When I saw the new ENT he immediately diagnosed me with Meniere’s and gave me a prescription for diuretics.  Needless to say, my condition did not improve.  Over the course of a few months, I was repeatedly seen in his office for Dix Hallpike maneuvers.  The last time I saw him, I was in his office for a follow-up appointment in the morning.  That afternoon I had a vertigo attack, called the office, and was given an appointment with an on-call doctor for another Dix Hallpike maneuver.  When this ENT saw me in the state I was in, and read my chart, he began asking about what tests I’d been given – the answer was none.  He immediately scheduled me for a CT Scan and a VNG.  When the results came back negative across the board he told me I needed to see a neuro-otolaryngologist and gave me a card for a doctor at the University of California, Irvine, Ca campus.  I immediately made an appointment.  In the meantime, I also scheduled an appointment with a standard neurologist, who administered and EEG and declared I did not have migraine – but he didn’t know what was wrong.

Upon seeing the doctor at UCI – Irvine, he diagnosed me with chronic migraine.  With little explanation, he put me on Nortriptyline and told me to start following the migraine diet.  I saw no relief.  After three appointments, he started me on Verapamil.  I began to see a little improvement; the nausea and vomiting stopped, and while I felt like I was drunk all the time, I wasn’t having vertigo.  After being on the Verapamil for a few weeks I started to have pulsating vision.  My doctor told me to see a neuro-ophthalmologist; he said the pulsating vision was caused by my heart beating too hard.  Turns out the nortriptyline cases my heart to race and the Verapamil lowers my blood pressure.  I was told I was not to exert myself in any way, limiting exercise to 20 minutes on a recumbent bike, on low speed.  After the first appointment, I didn’t see the doctor I only saw his physician’s assistant, I felt I needed a more interactive relationship with my doctor.  I began researching migraine specialists in my area.

I ended up at the University of Southern California (USC) neurology department.  After an hour with a doctor, multiple tests, etc. she told me I have Chronic Migraine with Brain Stem Aura.  She immediately sent me in for additional MRI’s, CT Scans, and bloodwork to rule our MS, lupus, brain tumors, etc.  Once the results were received I went back for my first round of Botox injections – all 31 of them.  Within 2 weeks I started to see a little more improvement.  I’ve just been in now for my 3rd round, and while not perfect I can function almost normally for longer periods of time.  I’ve had to cut back to 3 days at work, any more than that and it puts in bed for 2 days.  I am still on the Nortriptyline and Verapamil.  I have the prescription for the new CGRP injection but have not received it yet.

Prior to all of this, I had episodic migraines, with visual auras of sparkling lights.  They began when I was 13 years old.  I had roughly 3 major migraine headaches a year before all of this.  I have been susceptible to motion sickness my entire life.  Recently I stumbled upon an article regarding childhood migraine manifesting as stomach aches.  When I was in the 5th grade I missed almost an entire year of school due to severe stomach aches.  At the time my pediatrician wrote it off as a reaction to stress, but now I wonder…

Currently, my daily symptoms include tinnitus, the feeling that I’m on a rocking boat, pulsating vision, fullness in one or both ears making it difficult to hear, brain fog, random visual sparkles, vision looks like I’m drunk everything moving much more than it should.  When a headache is coming my left arm goes tingly and my left leg goes dead with no feeling, I drag my left foot when I walk; my left-hand gets extremely hot while my right-hand goes ice cold.  My headaches start at the back of my head, usually on the left side, with a tell-tale neck ache.  I am constantly rubbing the bottom left side of my skull, trying to keep it from getting stiff.  I find myself moving my head, trying to crack my neck, and opening and closing my jaw trying to pop my ears.  I take Tylenol at the first sign of a headache, then Advil if needed.  My insurance didn’t approve the Cambra, and my doctor doesn’t want me taking Imitrex as it’s contraindicated for this type of headache.  If the pain gets to be too much I take a Xanax and anti-nausea and go to bed.  I’m hoping the new CGRP injection will help, but only time will tell.

I had my first Migraine at age 15. It started with the typical visual aura – a small zig zag point in my vision, slowly expanding out across my vision and I was then hit with the headache. After describing what was happening to my mum, she informed me it was a Migraine, as she suffers them too. Looked like I had inherited it from my mum’s side.

I suffered Migraines rarely after that, maybe one every few years. They always took the same path, the zig zag aura followed by a blinding headache where everything is just too bright, sometimes accompanied with vomiting, but usually just nausea. I could never ever work out what caused them. Was it chocolate, cheese, lack of sleep, too much sleep, missing meals, monthly cycle, hormones. I could never ever pin it down to one thing. 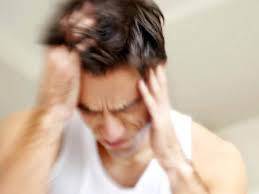